The Tate Britain has been hiding behind hoardings for some three years now, and it was with something akin to relief that they could now reopen with a fully functioning museum. Building works are always tedious, and never more so in a public space when suddenly the café has moved, the toilets don’t work or the library is no longer housed where it used to be. Director Penelope Curtis was at pains to re-iterate that in fact this has been less of a rebuild and more of a restructure, utilising spaces that already existed, and connecting the whole in a more logical fashion.

Within moments, it is true, you forget how it used to look, but the awkward accesses, dead-end corridors and dreadful café still linger in the memory.

The restructure began with the hugely successful rehang of the collection along chronological lines – the BP Walk through British Art (reviewed here in July 2013). On the perimeter of the building you can now wander through the changing face of British art, where the greats rub shoulders with lesser known names. There is the chance to marvel at things like an early screen by Francis Bacon, who started out as an interior designer, decades before you come to his 1944 wartime triptych, Three Studies for Figures at the Base of a Crucifixion. Henry Moore’s long career, or that of the recently deceased Anthony Caro, is apparent in the way their work crops up again and again. The blurred distinctions between the Victorians and the modernists shows up more strongly in a strictly chronological order and a rather random sculpture of Christ’s agony makes more sense against the WW1 paintings of its time.

This part of the £45 million restructure was revealed in May this year, but now the Millbank entrance has been reopened, and with it, new learning rooms, a brand new café and the quirky backdrop to the Tate Restaurant, or the Rex Whistler as it is now called, after the artist who completed an enormous mural for the setting while still a student at the Slade in 1927. The rotunda has been opened with a new circular Art Deco-style staircase to allow daylight into the lower areas. The huge dome above it seems lighter and airier than ever before, while the upper floor, which hasn’t been opened to the public since the Twenties is now such an amazing Members’ Room I’d join simply to have access to it! 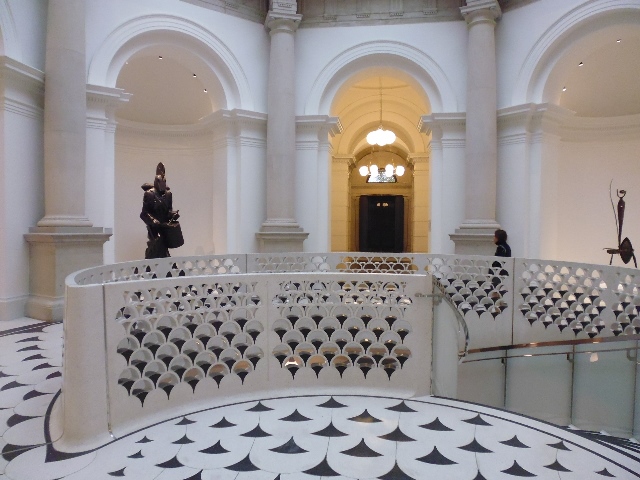