Tate Britain has had a radical rehang as part of its ongoing change, and recently unveiled a chronological display of its British art which now shows off many gems which were languishing in storage. Presented around the outer perimeter of the Millbank galleries, the new display, the BP Walk through British Art, has proved hugely popular with the public, judging by what could have been a quiet Monday afternoon.

Beginning with Tudor portraits, it not only becomes a social history of Britain but a chronicle of changing costume and habits. It is a fascinating tool for any student of art to see how the country and its manners altered. 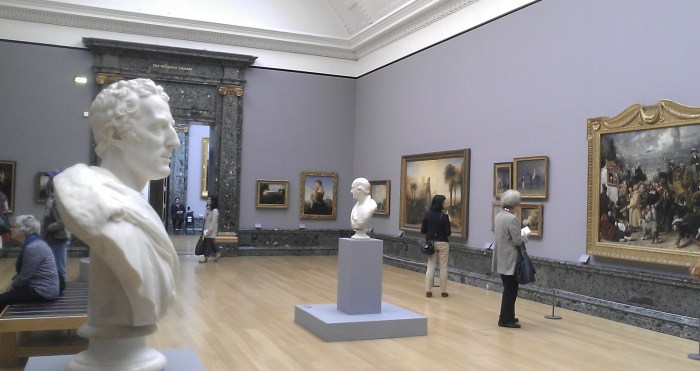 There are sweeping views of a Belsize manor house with the city glimpsed as smoking chimneys in the distance, people swimming under Westminster Bridge and Canaletto’s huge view of the Old Horse Guards from St James – surprisingly unchanged. Britain’s nautical power is reflected in great shipping scenes, classical mythology gives rise to grand canvasses, we see Stubbs’s horses and Gainsborough’s portraits. Joseph Wright of Derby depicts the eruption of Vesuvius in the late 1700s, its destruction echoed later by a quartet of John Martin’s Victorian apocalyptic scenes.  Constable portrays an idyllic English countryside but the best Turners remain in the adjoining Clore Galleries.

Stepping into the Victorian era, a huge gallery allows for double hanging and reveals the shock of the Pre-Raphaelites, but also a Stanley Spencer, Bomberg’s Mud Bath and the exquisite beauty of Whistler’s Nocturnes.

Not beyond the war, though. Passing through the bookshop, it all seems to fall apart. No doubt that is in part because the rooms now look old-fashioned and cramped with the larger scale of modern work, especially some of the sculpture which crowds out everything else. 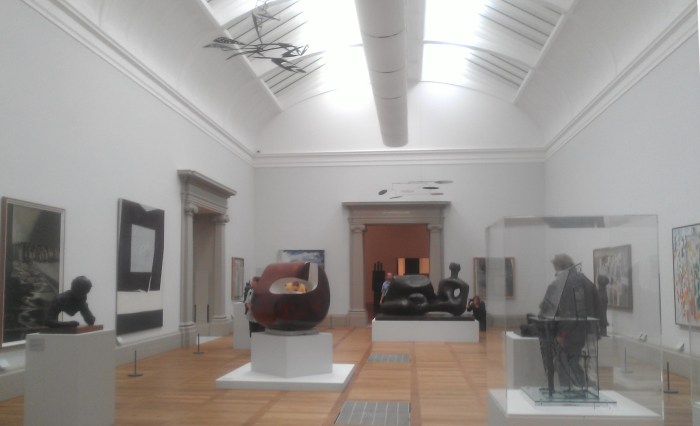 Epstein’s Jacob and the Angel, a large alabaster work from 1940, needs space around it, rather than being squeezed into a tiny crossroads of a room. Henry Moore’s reclining nudes fare better, but still are best seen outdoors. From there the work simply reflects the cacophony of the twentieth century.

Hockney’s  A Bigger Splash is seen through the red poles of an Anthony Caro sculpture, Bridget Riley’s pop art makes a colourful pattern, Hoyland and Hodgkin add another dash of colour. There are two early Lucien Freuds, an ugly, boring Damien Hirst (a desk in a glass case) and stepping into the Chapman Family Collection feels like walking into an African curio shop, until you see the Big Mac signs on these ethnographic figures.

Perhaps then it’s time to head across the river to the Tate Modern, where there is more breathing space for this stuff. If the BP Walk Through British Art is how the company salves it conscience though, one can only applaud its corporate sponsorship.

One thought on “Tate’s rehang shows off its gems”