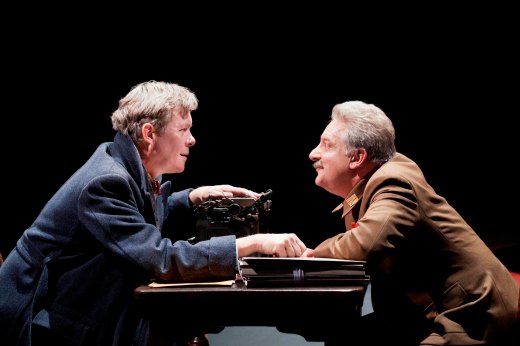 A comedy about Stalin? It sounds outrageous, and in fact it is. Dark, bitter, savage, and very clever, Collaborators is a new play by John Hodge about the Russian playwright Mikhail Bulgakov, who was given a poisoned chalice by the regime when asked to write a play celebrating the life of Stalin. The time was 1938. Stalin was turning 60. And suddenly the writer who was acclaimed for his subversive play The White Guard began spouting propaganda. Hodge’s play imagines how this could have happened.

In fact, it could have been any time, anywhere, because this is a brilliant dissection of the power of fear. It asks questions about who pulls the strings, about how creative artists can remain aloof from the regime and how a dictator deals with dissent. And it looks unflinchingly at the allure of making your voice heard.

Stalin is drawn larger than life, bursting on stage in Bulgakov’s nightmare – a cartoon-like figure that battles with him and gives him sleepless nights. The reality is so much more benign, that we laugh with relief. Bulgakov is a man riddled with anxiety, but rigid in his principles, an artist who stands as a beacon of hope for other writers. After three years of rehearsal, his play about Molière has finally had its first night, only to be closed the next day by the security police, in the form of Vladimir and his emaciated, silent, side-kick, Stepan. Broad and jovial, Vladimir offers Bulgakov the chance of having his play on stage again if he concedes.

Numbed with writer’s block, help comes from an unlikely source, and soon Stalin is actually writing the play for him. Meeting underground in a secret hideout, the two become collaborators. Stalin grabs the typewriter, and pushes his pile of files towards the other man. He writes, while Bulgakov is faced with the conundrums of ruling. And with every paper he signs, he steps deeper into the quagmire. As the hot water in his apartment is turned on, and coffee appears on his table, there are others who are disappearing.

A trio of Britain’s best actors make this an unmissable treat. Simon Russell Beale is wildly funny as Stalin, a man with an enormous personality. He is so friendly, so relaxed, so very human, that one begins to think the monster is a myth. The audience is taken on the same journey as Bulgakov, played by a nervous Alex Jennings. Initially suspicious, haggard but firm in his beliefs, he is slowly won over by the sheer reasonableness of the tyrant. The accord the two actors achieve is the pivotal hinge of the play. Mark Addy offers a foil as the secret policeman with a heart, but he is quicker to show the iron fist inside, reminding us constantly of how surreal this “collaboration” is.

Bulgakov’s slow dawning of what is actually happening is mirrored in those around him – individuals blasted into orbit by the sheer force of Stalin’s power. The strong cast, especially Jacqueline Defferary as the bewildered wife, William Postlethwaite as the idealistic young writer and Pierce Reid as the happy lodger, all give beautifully nuanced performances. Director Nicholas Hytner draws us into this giddying maelstrom of the abyss of terror with a touch so light that we laugh even as we gasp in horror. He envelops us in a gossamer-thin web of delight that inexorably pulls tighter until it suffocates.

John Hodge is a screenwriter who has made his name with films such as Trainspotting and Shallow Grave, both directed by Danny Boyle. This is a very visual production, despite its historical antecedents and the depth of its content. Images such as the parallels Hodge draws with Bulgakov and Molière both incurring the wrath of the ruler are powerfully evocative. It’s not an easy play to film though, as it is played in the round in the National’s smallest theatre, the Cottesloe. As part of the stage audience you are so engrossed in the action that your fellow audience members don’t really register, and hopefully the film directors allow one to remain equally focussed.

Collaborators kicks off the 2012 NT Live season with a superb production of British theatre, and one that will resonate particularly with audiences in any country that has felt the oppression of fear.