It looks like a who’s who of British modern art today. In fact, it is Cornelia Parker’s long-term installation at the Foundling Museum, tucked away in a secluded corner of Bloomsbury where you can stroll through the museum and see the quirky, often funny, sometimes downright silly collection of Found (until 4 September) objects that today’s A-list of painters, sculptors, architects, and even writers have gathered.

The Foundling Museum has a long history of association with art and music. Hogarth was one of the founding governors of Thomas Coram’s Foundling Hospital and encouraged artists to produce work for it, creating what was the UK’s first public art gallery and leading to the establishment of the Royal Academy. Handel was also an early governor, and donated an organ so his Messiah could be performed there in 1750, where it has been played annually ever since. A grander artistic heritage would be hard to find, but since this museum was established near the site of the original Hospital in 2004, it has tried to uphold those lofty ideals.

Set up by the sea captain Coram to offer a place of refuge for abandoned children in 1739, the Hospital kept a collection of heart-breaking tokens that mothers left with the children they were forced to give up. These poignant objects, trinkets that held huge emotional power, were what inspired Parker’s exhibition. The curios that artists have come up with range from a cannonball dating from Napoleonic times that reminds David Nash to keep his art simple, and a walrus skull now displayed under Hogarth’s portrait of Thomas Coram to the silver spoons in the museum’s cutlery display that Thomas Heatherwick’s grandmother stirred into gravy for 70 years, leaving them with a flattened end.

There is a lot of humour and wit in the displays, and often they are concealed in plain sight amongst the museum’s historical collection, such as Humphrey Ocean’s hubcap amongst the silver. As with Rose Wylie’s huge ugly oil painting Jack Goes Swimming, which scars any view of the gracious wooden staircase lined with period portraits, they also jar horribly with it at times. Mostly, however, there is delightful whimsy and curiosity to be discovered in their stories, such as John Smith’s ode to the painting stick his father used, which in its layers of colours left behind, like the rings on a tree-trunk, recall a family’s social history in paint. Many of the works are made from found objects, from Mark Wallinger’s huge pixelated portrait of a drunken girl, an image taken from the internet, to Fiona Banner’s neon display from fluorescent tubes she picked up on the beach or David Bachelor’s white squares he tracks down and photographs in cities all over the world. 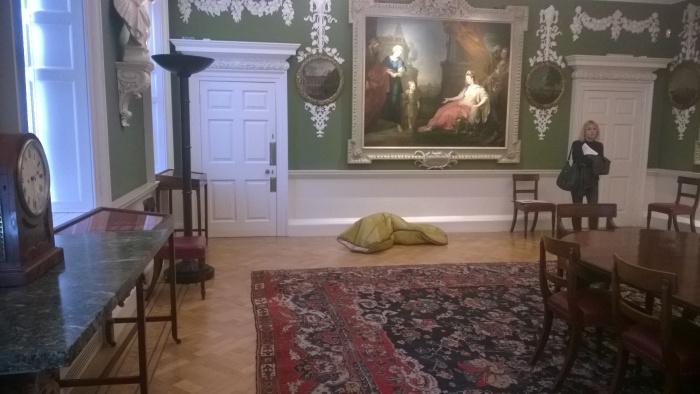 The rooms are dotted with what Parker describes as her ‘relics’- objects given to her by people. The most powerful placement of artworks are Antony Gormley’s cast of a tiny baby, curled up alone on a cold empty floor, and Gavin Turk’s sleeping bag, with the outline of a homeless person inside permeating the ornate decoration of the Court Room, an interior that was where the fate of these abandoned children was decided.

It’s impossible to visit the museum and ignore this exhibition, and Parker has very cleverly enhanced one’s understanding of a subject that sadly has never been consigned to history. 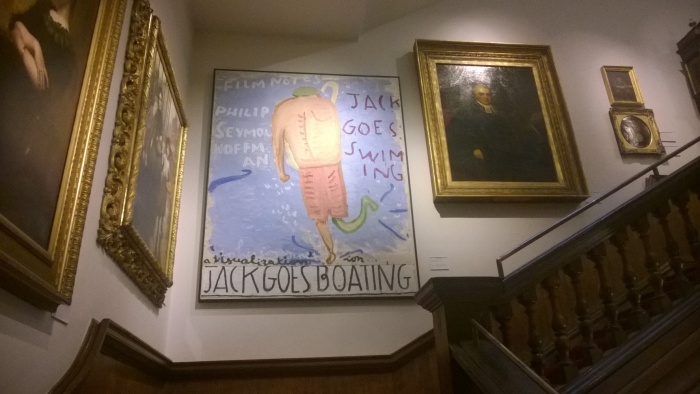 The modern clash with old