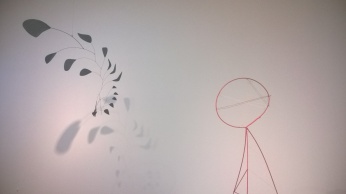 If I write the word sculpture, you probably think of something solid and heavy, the sort of thing you may find in an old park. Alexander Calder has changed that forever. His sculpture is light and ethereal, it floats and changes. The shadows you see will never quite be those that I have seen. It invites you to look up, walk around, to contemplate its movement. How he came to be the master of this magical fantasy is shown in the Tate Modern’s new show, Alexander Calder – Performing Sculpture (until 3 April 2016).

It starts with the Paris circus scene, and the first room is filled with wire portraits that often only make sense in the shadow on the wall. The American artist turned to mobiles after a visit in 1930 to Mondrian’s studio, where he wanted to see the abstract forms move. His initial experiments were first mechanised shapes and then beautiful, vibrant free-floating shapes against large, coloured panels, which don’t look their age at all. His early circus figures are less impressive than the interactive and often contemplative later work that floats in deceptively simple patterns around itself.

Alexander Calder – installation shot of Red Panel and Snake and Cross, both 1936