China may be inclined to lock him up, but London has certainly laid out the red carpet for that thorn in the side of the Chinese government, Ai WeiWei. No matter that some over-zealous British official decided to refuse his visa initially, there has seldom been such a hero’s welcome for any artist. The Royal Academy presents a retrospective (until 13 Dec) of this internet superstar who regards his sole purpose to highlight political injustice in his society.

Ai WeiWei’s incarceration in 2011 and the reason he provoked the Chinese authorities form the core of this collection of works which date from his return to China after a decade in the States. A seasoned blogger, the 2008 earthquake in Sichuan left him at a loss how to respond. Visiting the site and seeing how many children had lost their lives was the start of a huge project to document their names. In the Academy’s ornate central hall this list of names is a stark tribute to the thousands of schoolchildren obliterated, but on the floor is an even more powerful homage: the steel rods that should have held up the buildings. In Straight this mangled rebar from the disaster site has been painstakingly straightened and heaped up, to form an undulating landscape of its own. 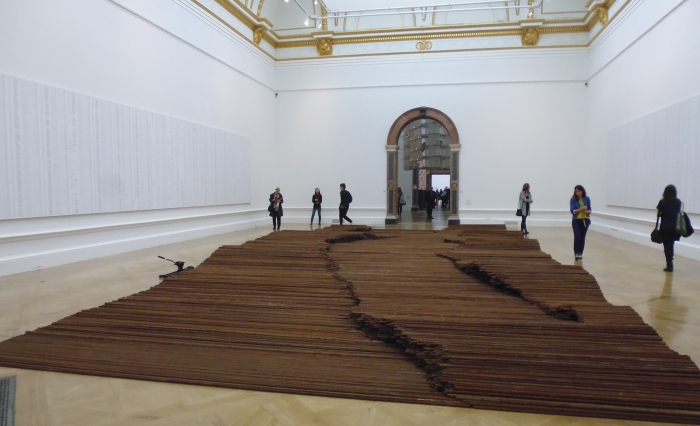 Re-using the old to make something new is a theme of his work. Ancient terracotta pots covered in industrial paint, an antique bedstead surrounded by the rubble of his Shanghai studio that was demolished before it was ever used, a construction of wooden pillars from ancient temples that reads like a map of China from above, with two joined stools standing in for Taiwan.

There is something deeply unsettling about seeing a sofa that would have been ugly made up in soft fabric now produced in cold, hard marble. It references the Ming dynasty’s penchant for creating everyday objects in precious materials to show off China’s wealth. WeiWei does that all the time,  juxtaposing the precious and the banal: perfume bottles and sex toys made from jade, marble surveillance cameras and video recorders, porcelain human remains and a crystal chandelier made of bicycles. In all of his work he uses the traditional craftsmanship that is being obliterated in China’s relentless drive for modernisation. The social references abound, whether it is that his marble is sourced from the same place as that of Mao’s tomb, the crystal from the same source as the Great Hall in Tiananmen Square or the river crabs at the pre-demolition party in Shanghai that are a play on the word for harmony.

Finally, in S.A.C.R.E.D he recreates his own 81 day ordeal in a series of half-sized metal containers showing vignettes from his detention, about which he was forbidden to speak. The visitor can peer through a tiny hole at the top or the side to catch a glimpse, experiencing something of the psychological oppression when his every moment was watched by two officials.

It is all done on a monumental scale that can’t fail to astound and the more one understands his story, the greater impact the work has. It is difficult though to separate the art from the activist, and only time will tell how much of it has staying power. Perhaps Ai WeiWei’s greatest creation is his own international status, a superhero of an individual’s power of resistance against an oppressive state.

In the courtyard of the Royal Academy, Ai WeiWei’s Marble Sofa and Reconstructed Trees greet the visitor. 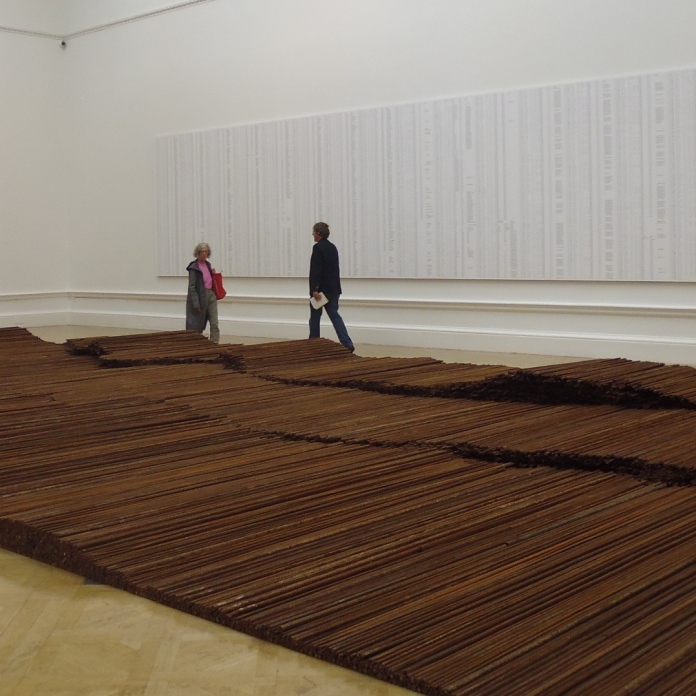 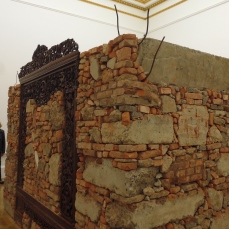 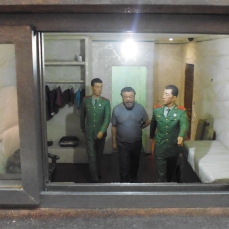 Ai WeiWei – Inside one of the S.A.C.R.E.D. tableaux 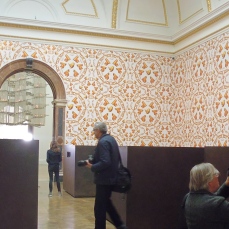