Henri Matisse’s cut-outs are some of the most instantly recognisable of his works. They reduced his art to simple coloured shapes that lend themselves to easy reproduction. I knew what I was going to see at the Tate Modern’s exhibition, Henri Matisse: The Cut-Outs, better than most. I have spent hours in art class tracing and copying the shapes, looking for an exact match of his beautiful blue and noting the different outlines of each apple in a work like The Parakeet and the Mermaid.

Nothing prepares you though for the sheer scale of what this elderly man was conjuring with a pair of scissors and a piece of chalk at the end of a long bamboo stick. Beginning with all the original plates from the book Jazz, the exhibition draws you along through some of the preliminary work for the chapel at Vence in the south of France to the enormous creations that cover huge gallery walls which he was making in the very last years of his life. They explode with such colour and vitality that it is almost impossible to believe they are the creations of a man facing death. 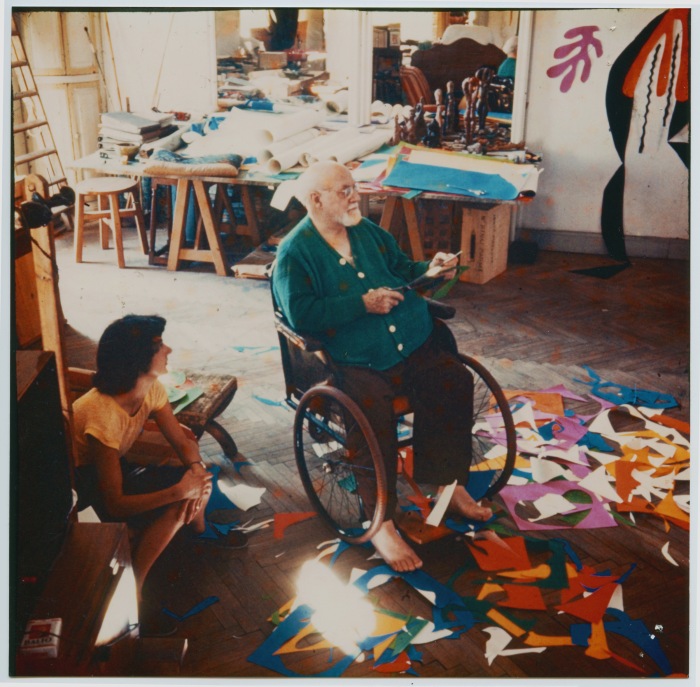 Henri Matisse in his studio, photographed by Lydia Delectorskaya

Matisse was unique as an artist in not only producing powerful works at the very end of his life, but finding a whole new visual vocabulary, and one that allowed him to overcome the physical limitations of his frail body. He had a long and celebrated career, which spanned over half a century, and worked in every medium. He was always challenging himself and finding new ways of expression, but it is rare to see such vigorous confidence while he explored what some derided as child’s play. He was unconcerned, saying: “I know that it will only be much later that people will realise to what extent the work I am doing today is in step with the future.” Even his arch rival Picasso could not match him for the prolific creativity that hallmarked this final chapter.

The show is at pains to trace the progression of this medium over the years, but also how works kept evolving into the form we know them today. The use of cut-outs began for Matisse as a means of mapping the position of individual items in a composition, and the early images of dancers for a stage curtain still has the pins he used to move things around.

The book Jazz was significant for him: vibrant images with a circus theme which are all modest in size, but some of the boldest variety in colour and execution. The title was chosen by the publisher and Matisse felt it captured his mood of improvisation. Here one gets a rare chance to see 20 original pieces he created alongside the book they were made for with his beautifully scripted text, but the cut-outs were still designed for another medium, rather than as stand-alone works.

The familiar seaweed forms are first seen here, but as the works grew in number and size, these shapes we now see firmly pasted down, would wave their tendrils where they were tacked on the walls of the artist’s studio. A recreation of a densely hung wall gives an idea of how Matisse was playing with colour and form as he contrasted shapes and sizes endlessly. Of course there is repetition, and some strike a chord more than others, but this was the point where Matisse abandoned painting for the magic of his scissors.

It is worthwhile taking the time to watch the short film excerpts of him cutting, with enormous shears, gliding effortlessly through a brightly painted sheet of paper to reveal its new shape, or instructing his diligent helpers as they teetered on ladders placing each piece.

The chapel at Vence, with its glowing stained glass windows, was considered by Matisse to be his ‘greatest achievement’ and the panels give an idea of its timeless spirituality. Now confined to his room, Matisse surrounded himself with his own joyous contemplation of a garden in the monumental The Parakeet and the Mermaid. The colours in these last works throb, they are so rich, playing with patterns and shapes with humour and inventiveness, capturing the fluid form of the female shape in his Blue Nudes, or the lively movement of The Creole Dancer.

This exhibition (until 7 September) is jointly curated with the Museum of Modern Art, New York, which hosts it from 14 October to 9 February 2015. It will be the first time the Tate’s iconic cut-out, The Snail, has ever left London since it was purchased in the early Sixties. This is not only due to conservation issues, but also due to the sheer size of carrier needed to transport the work. It is not the only first for the show: the Blue Nudes have rarely been shown together since their creation and never in the UK (one hangs in Basel, Switzerland, and the others in France). Matisse originally conceived The Snail and Memory of Oceania (MoMA, New York) as part of the Large Composition with Masks (National Gallery of Art, Washington), before separating them into their current entities. The three huge works have never been together since they were made in Matisse’s studio.

The verve and sheer audacity of these cut-outs will delight viewers with their brilliance. They are truly a testament to the artist’s ability to transcend the human condition. Don’t miss them.