Curious, isn’t it, that we can understand how a blue sky can make one happy, but find it more difficult to see why five red cars could give one a super good day? For Christopher Boone though, while red cars are good, a yellow car heralds all the gloom of a dark storm cloud. Describing himself as someone with ‘behavioural problems’, he is at a special school because he suffers from Asperger’s Syndrome, at the far end of the autism scale, but he is also extraordinarily gifted in maths.

Mark Haddon’s book, The Curious Incident of the Dog in the Night Time is one of those rare finds – a book that appeals to adults and children alike, as I found years ago when my young son enjoyed it as much as I did. For both of us, Haddon unlocked the detail of Christopher’s world in such a way we had a deeper understanding of what made one of his classmates tick. The book has built up something of a cult status and has won 17 literary awards and been translated into 44 languages.

Personally, I wasn’t sure how it would make the transition to the stage, but the play was sold out long before it opened at the National’s small Cottesloe Theatre. The book is an intensely personal autobiography narrated by Christopher, written as he begins investigating the murder of his neighbour’s dog. Simon Stephens, who adapted the novel for the stage, has got around this by adding another layer, so Christopher is now producing a play of his own story, at the prompting of his mentor Siobhan. And as another young maths student pointed out to me, the production has kept true to all that matters to Christopher, a person not prone to fantasy or imagination. So the dog (not the dead one, but the puppy at the end) is real, as is the pet rat and the train set. The policeman even has a yellow leaf stuck to his shoe and Christopher at one point demands a change of actor when he feels one is too old for the role!

For the rest, the stage is spare, laid out on a maths grid paper and making extremely clever use of lighting to create fluid and fast-paced changes of settings. The desperate moments on the London underground tracks, where Christopher tries to recapture his rat, to the terror of the onlookers, are achieved only with a basic stage lift and lights. And while I feel the boy’s inner shutdown when faced with the mental overload of the Tube became simply a cacophony of noise and movement, the play broadens the story from Christopher’s perspective to the impact he has on those around him. Adults and their messy emotional lives, parents and their fumbling attempts to reach their offspring, well-meaning neighbours and ill-timed words – we are all in there somewhere.

It’s never easy playing a child, but Luke Treadway, who starred in the stage production of War Horse, does a fantastic job of showing us the child that inhabits the young man’s body, at that awkward transition into adulthood. He combines the boy’s rather pedantic approach to detail, his delight and solace in the rigid structures of mathematics, his confusion and petulance in family matters with an engaging charm.

The Curious Incident of the Dog in the Night Time: Luke Treadway and Niamh Cusack

Niamh Cusack as Siobhan, the only adult he can trust, is rather too syrupy for my liking. Paul Ritter’s dad, Ed, gives a brilliantly textured portrayal of a father’s love with frustration, anger and remorse, while Nicola Walker as the mother who seems to come back from the dead is also nuanced in her dream of personal fulfilment and bonding to an offspring whose demands are endless and exhausting.

Director Marianne Elliott uses wit and insight in a play that is perhaps not quite as intensely powerful as Haddon’s novel, but nevertheless captures much of its essence. A tightly meshed design concept from Bunny Christie and Paule Constable is evident from the moment you walk in to find all prime numbered seats marked in white, to the spectacular mathematical proof Christopher gives as a finale.

Curious Incident of Dog in the Night time – Sunday Independent 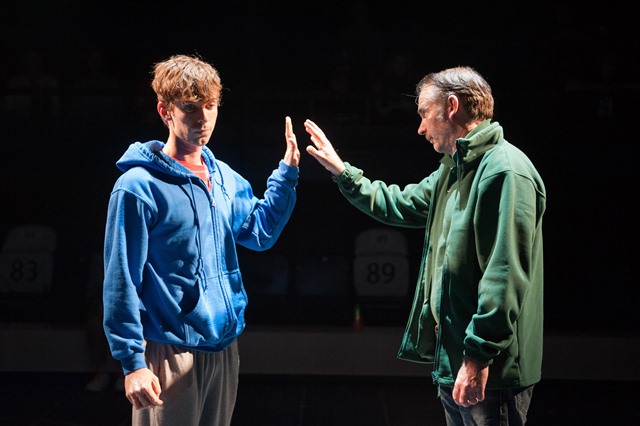 The Curious Incident of the Dog in the Night Time: Luke Treadway (left) and Paul Ritter