Did you know Van Gogh was one of the first visitors to the newly opened Rijksmuseum in Amsterdam, visiting the Rembrandts just before he moved to Paris? Or that the Nachtwacht was deliberately placed at the end of the gallery of honour in the altar position of a church? 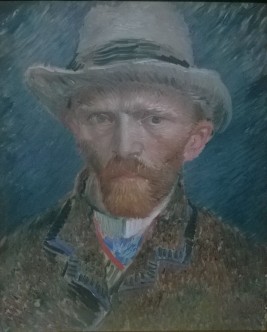 Van Gogh – an early visitor to the Rijksmuseum

Somehow the Rijksmuseum feels to me as if Rembrandt himself should have visited it, rather than Van Gogh, so it came as a surprise to realise just how recent this building is. The jewel in the crown of this Dutch collection has always been Rembrandt’s Night Watch, with the museum’s other treasures placed in bays leading up to it. Opened in its current building in 1885, the architect Pierre Cuypers echoed this design in another famous building, the railway Centraal Station, effectively creating city gates on opposite edges of Amsterdam. His concept of a city gate makes it less surprising then that the museum has a road running straight through it. In 2004 a complete renovation of the museum resulted in a decade-long closure of the building, which reopened again in April 2013.

The 2014 Rembrandt: The Late Works exhibition in London at the National Gallery must have left a lot of empty wall space in the Rijksmuseum’s treasures gallery: The Jewish Bride, Self-Portrait as the Apostle Paul, The Syndics, and even the Swedish gem, Rembrandt’s painting of the one-eyed chieftain Claudius Civilis, which is on long loan to Holland, came to London. The paintings look better in their own home, where crowds gather reverentially in front of the huge Night Watch, much as they do in the Louvre in front of the Mona Lisa. Many volumes have been written about Rembrandt’s painting, but to see it in reality is a huge thrill. The woman next to me mistakenly thought the painted beam was a museum spotlight on the militiamen. Rembrandt’s use of light is indeed spectacular: the shimmering gold of the lieutenant’s uniform, the dark hand of his superior casting a shadow over that part of the brocade where the Dutch lion roars, effectively holding it between thumb and forefinger. No wonder that these men were prepared to pay so much to have their portraits done – even a character on the edge of the canvas paid twice his annual salary to be part of this swirling explosion of energy and drama. 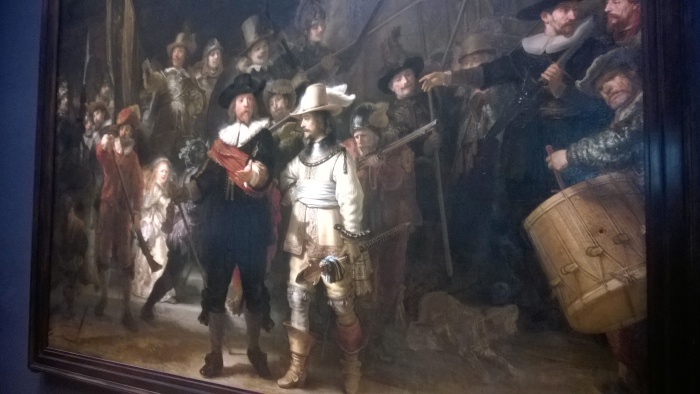 Hanging right next to the Night Watch is a pair of marriage portraits by a younger Rembrandt which marks a milestone in international co-operation between museums. These two-metre-high portraits of Marten and Oopjen, which have always been in private hands, were bought jointly by the Rijksmuseum and the Louvre in January this year. They will be shared between these two institutions in cycles of five to eight years once they have been restored. For now, however, they have been presented to Paris for three months, and are on display in Amsterdam for a similar length of time. There is no doubt they will be a welcome addition to the Dutch collection when they take up residence. The crowds seemed delighted with the newcomers as they admired the young dandy and his wife, dressed in their expensive lace and painted by a 28-year-old who never again did similar full-length portraits.

The decade it took for the Rijksmuseum’s restoration to happen was largely due to the new sunken levels, which now house the entrance hall and visitor facilities. Engineers would don wetsuits and descend the murky depths of the pit as they battled the city’s water-levels to give the museum its extra spaces. Upstairs too, the original entrance hall, which had been painted over in white, took many hours to reveal even a centimetre of its early decorative features. Eventually it was decided this was too time-consuming, and the halls were repainted according to the architect’s designs, once a colour match had been decided. The canvases that had been recessed in the walls, and were deemed to have been destroyed many years earlier, were serendipitously discovered under the floor-boards in the museum director’s offices in the final months before the re-opening.

Rijksmuseum – a city gate, with a huge poster announcing the arrival of Rembrandt’s double portrait

The Rijksmuseum is a huge place to explore, and a guided tour is an excellent place to start, a mere €5 on top of the entrance fee, which also means you can skip all the queues. I was perhaps lucky and wandered straight in, but the wealth of information you get from your tour guide is in my mind better than any recorded audio guide.

As an aside, one thing that seems to have been overlooked in the rebuild is a canteen for the masses. Don’t get there hungry unless you have time and cash for an expensive sit-down meal.

Not the Rijksmuseum, but Cuypers’ other masterpiece, Amsterdam Centraal